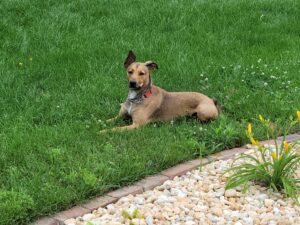 Most of the time when someone asks me about a rescue animal’s past, the animal conveys unpleasant, sad, or even abusive scenarios. However, in this case, I’m going to share a delightful discovery from a rescue dog during the first few days of his adoption.

My client, Laurie, adopted a rescue dog named Cosmo. He had experienced 5 other homes prior to hers. She contacted me within days of them being together as he was exhibiting excessive barking and wailing when she left him alone, whether in the house or car. Laurie fosters cats and dogs and was concerned about the influence his disruptive behavior would have in her environment, as well as wanting to compassionately help him feel secure and bark less!

What’s In A Name

One question Laurie asked during our session, ‘Does Cosmo like his name?’ I’m asked this question on occasion, and the response most animals give me is that they prefer being called a name that brings joy to their person. When a pet hears the happy vibe in the tone of their person’s voice, it lights up their heart, because it also makes the person feel happy! I suggested for Laurie take some time to ponder on a name that felt joyful to her.

While covering several concerns that Laurie had about Cosmo, one of the most important questions that Laurie asked was, ‘Does he want to stay with me? Is this a good fit for both of us?’

I clearly heard Cosmo respond, ‘Mi casa, su casa,’ a Spanish phrase which translates to, ‘My house is your house’. Thank goodness for those few Spanish classes I took in high school! I felt like he had lived with someone, in one of his 5 previous homes, who spoke Spanish! Then, to my surprise, Laurie began speaking Spanish to him! She had spoken fluent Spanish some years ago.

Immediately Cosmo rushed over to her, began licking her face and acting animated. Laurie spilled out more Spanish, and Cosmo kept doing happy dances in front of her. We were on to something significant which was bringing Cosmo a feeling of joy and connection!

Laurie emailed within days with this feedback.

The dog, formerly known as Cosmo, is now Taco!

We ran through a bunch of names, and he didn’t love any of them. So just being silly I started going through food. He got all silly when I said Taco, so here we are! He already comes to it. I wonder if that was his name somewhere along the line.

He enjoyed talking to you. When I ask him if he had fun, he comes over and puts his paw over my heart ❤ or he just lays his whole body on top of me.

Overall, much progress since speaking with you. We didn’t go anywhere today, just hung out and chilled. Thanks again for fitting us in!!

About a month later Laurie wrote,

It’s been about a month, and I wanted to give you an update on Taco (formerly known as Cosmo).

He’s made a lot of progress since you spoke to him. He goes to daycare and plays like a real dog! He even played with a toy at my dad’s a couple times. It was an old toy of one of the dogs, not sure which, and it’s the only one he will play with. We did an agility class, and he was the star! The trainer kept using him as the example. So, I signed him up for a series of 4 classes starting next Saturday.

I take him most places when he isn’t in daycare as he is learning to adjust. He goes to pickleball with me, and he gets all the love from everyone. We visited my mom, and he was like a therapy dog. They converged on him like zombies, and he didn’t even blink. He walked by my mom’s wheelchair like he’d been doing it forever.

He seems to be able to stay in the car now when I run into a store, and he doesn’t bark or whale anymore. I can leave him alone in my room for a bit without him panicking but if the door isn’t closed he feels insecure and barks. But still a good bit of progress in just a month, considering I am at least his 5th home in 18 months. He did stay with my dad for a few hours last night, and my dad thought he was bummed out. He was crazy happy to see me. We’re very bonded in a way I never thought I could bond to a dog again.

A friend gave me a dog bed, and he was so interested in it.  He came with a bed, but he really wanted this bed. Her dog just passed a few weeks ago. It’s like she was there too, though I never met this dog.

I feel like all the animals from my past are like this huge support system, Team Taco lol.

I just wanted to say thanks for fitting us in so fast and to let you know how well we are doing. I look forward to talking again in the future to find out if he is a pet from my past that has come back at the time I needed them the most, or who sent him to me, and to thank them for either coming back or having the mindfulness to guide him to me when my heart was open to accept him.

With love and appreciation,

Most of you probably know that Spanish phrase means ‘Thank you and goodbye friends.’ I just love a story with a happy ending, don’t you? As a result of truly listening to Taco, we landed on a key aspect about his past, his familiarity with the Spanish language! It clearly brought a sense of security, comfort, and renewed zest in both Taco’s life and in Laurie’s! And frankly I, too, felt all sparkly inside, my heart laughed with joy and my belly tingled with a giddy lift. It’s certainly the best kind of contagious energy to spread around these days, curiosity, discovery, joy, and gratitude!